I love my food, and especially meat..bacon, minted lamb steaks, sausages, chicken, fish….mmmmm!!  So this 50@50 challenge was one which I had real trepidation about ( and so did Chris as he thought I was going to be miserable company for two weeks).  To add to my concerns I am back at slimming world, to try and achieve another challenge of losing some weight,……so this meant I had to be careful about cheese ( have I mentioned my love of cheese too??  Can’t think why I may need to lose weight!!). Anyway last night I completed my two weeks and….wait for it

I REALLY ENJOYED IT 😊😊

It was not a hardship at all.  I treated myself to a finale meal of Kodava Mushroom Curry with coconut ( a Madhur Jaffrey recipe ) which was quite high in syns because of the coconut milk, but it was rich, tasty and felt like something you would order out. 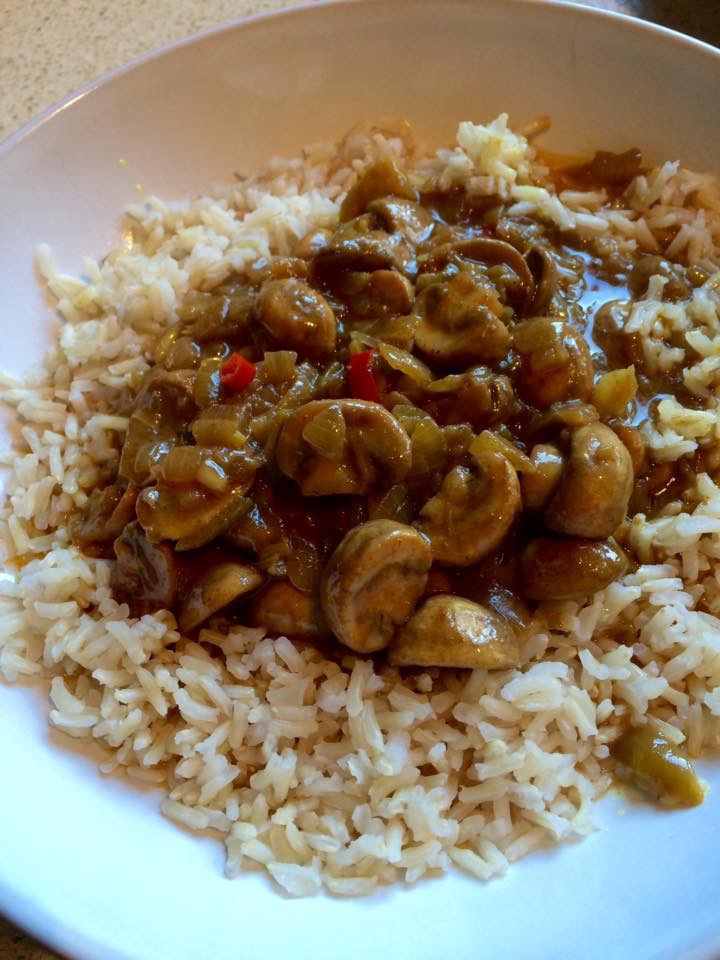 I discovered I really like chickpea Dahl ( I am a bit of a food snob and would not normally eat tinned food but more fool me as I have been missing out…only 2 syns per tin and very tasty for a quick lunch on jacket potato).  I have also eaten lots of roasted peppers ( add goats cheese five minutes before the end….heaven) and then cold with couscous made up with ras el hanout stock.

I also tried some ‘vegetarian’ products like sausages, a pie, meatballs and Quorn.  I found out that Quorn mince was great and as long as you use seasoning and spices there is very little difference, and the meatballs were particularly good.  As for the sausages…..not quite the texture or taste of a wild boar or pork and leek sausage…so not for me.

My one big mistake was to use Parmesan cheese which I had no idea that vegetarians did not eat… I think because of the rennet. The big bonuses from these two weeks were the savings I made on my shopping bill….considerable savings (although these may have been swallowed up by Chris who ate at work for two week.  Also at my last weigh-in I lost 3lb and hoping for another loss this week so it obviously agrees with me.

I did not attempt this for ethical reasons, merely for making myself try different  foods and to see if I missed meat.  After two weeks I have not, however after two more I am sure I would.  But I don’t have to wait that long as I am off soon to my good friend Helen who is cooking a leg of French venison…and I am very much looking forward to it.  But, I am considering having either a designated vegetarian day ( if there is not too much dissent in the camp) or maybe Mon-Fri vegetarian lunches…as I think I will stick to being an omnivore, but with less emphasis on the meat!!